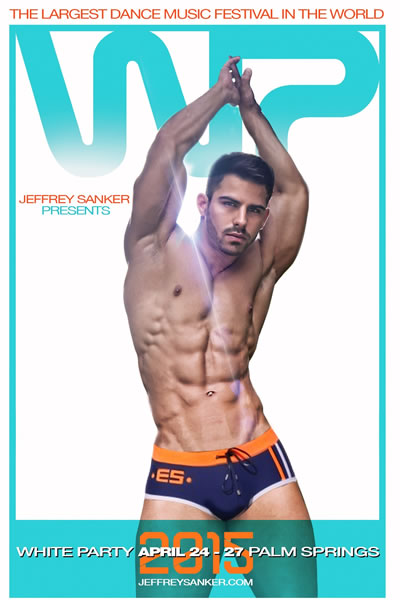 Join White Party Ambassador, Big Brother and Rock of Ages star Frankie Grande, along with tens of thousands of sexy men from all over the globe for White Party Palm Springs 2015 happening April 24-27, 2015.

Visit www.jeffreysanker.com to get event passes, hotel accommodations and all the latest White Party 2015 details.

Sanker explains, “White Party has been given a high tech upgrade with “fast track” scanned wristband entry and paperless ticketing, as well as the new White Party smartphone app. This will reduce time in line and provide faster entry to all events. We’re also adding twice the number of bar stations for the fastest possible service.”

For its all-new Saturday event, White Party will completely take over Wet 'n' Wild Palm Springs Water Park, offering the entire 21-acre oasis exclusively for attendees. To make this aquatic experience complete, Sanker will bring in a custom stage and sound system to pump the grooves from DJ Gustavo Scorpio and DJ Grind throughout the park. Complimentary round-trip shuttle service will run continuously from the Renaissance Hotel. Ride all the slides (including the incredible new Flow Rider) or lay out and relax by the wave pool. Reserve one of 30 private poolside cabanas for you and 10 to 20 of your friends to get full view of all the wild festivities. This is White Party 2015’s only event for ages 18 and over and it will sell out.

With White Party happening in less than five months, it’s time to prepare. Get ready to show some skin at the ADDICTED TO WHITE Underwear Party. Presented on Friday night by “Addicted,” from the internationally acclaimed ES Collection, this sexy party will sizzle like never before, fueled by the sounds of DJ Kitty Glitter – direct from down under, along with Spanish DJ and remix producer sensation Dani Toro and South Beach’s musical mastermind, DJ Kidd Madonny!

For those who can’t get enough Aussies, DJ Dan Slater, who blew up after winning the recent Sydney Mardi Gras DJ Spin-Off Competition, will hit the decks poolside at Saturday’s Renaissance Hotel Splash Pool Party to bring his own brand of musical “thunder from down under” along with DJ Casey Alva.

Later that night at the White Party main event, arm yourself for our own special Spanish-American invasion as American hit machine DJ/Producer Chris Cox leads the armada, followed by the beefy Barcelona beats of DJ/Producer Nacho Chapado, in his White Party debut. The evening culminates when Spanish DJ/Producer duo Chus and Ceballos ignite the Palm Springs Convention Center with an explosion of their signature “Iberican Sound.”

Living DJ legends Ralphi Rosario, Wayne G., and yet another Aussie, Paul Goodyear, stand ready to work their sonic wizardry on Sunday at the Largest Outdoor T Dance in the World!! Whether you're out on the dance floor or taking it all in from the top of the world-famous White Party Ferris Wheels, there’s no shortage of eye candy or spectacular views. As the sun sets into evening, all eyes will be on the sky for the legendary T Dance fireworks display, choreographed to an exclusive musical remix by Wayne G.

Celebrating DJ Abel’s 20th anniversary at White Party, get “READY, WILLING & ABEL” for a very special Closing Party, the weekend’s final event. DJ Isaac Escalante – flying in direct from Mexico and fresh off his global tour - gets the action on the dance floor going. Then, as anticipation builds, hold on tight as the man of the hour, DJ Abel, hits the stage dropping a cannonball of infectious grooves and beats to keep the celebration pumping all night long.

After Abel’s final encore, take Monday off from work to hang out by the pool and reminisce with friends one more time before saying good-bye…until next year.